Roguelike Highlights: Sword Of The Stars: The Pit 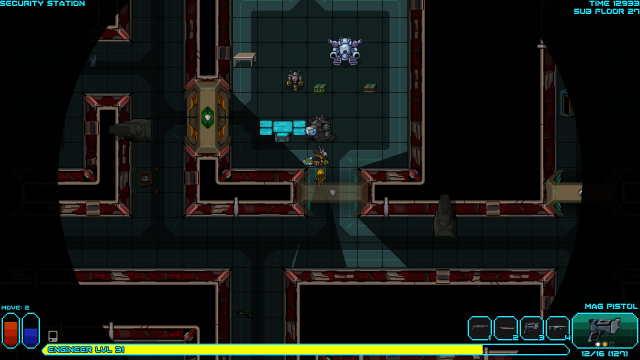 Readers unfamiliar with roguelikes may wish to read my introduction first. Previous Roguelike Highlights can be found here. Also, as always, you can click on screenshots for bigger versions.

I have never played Sword of the Stars. Apparently it is a space-faring strategy game of the 4X variety. The four “X”s in question stand for eXplore, eXpand, eXploit, and eXterminate. So really it should be 4E. Anyway, the 4X game is a time-honored subset of the strategy game genre, one where building up armies and conquering the world/solar system/universe/general area is the only viable strategy. There are, naturally, many ways to go about this, so these games are no less tactically rich despite their focus on military supremacy. In fact, now that I think about it, Master of Magic (which I’ve previously covered in History Lesson form) qualifies as this type of game, so you can read my post about it if you want more details about the sub-genre.

Anyway, I gather that Sword of the Stars (aka SotS) is a lighthearted take on the classic design, provided the roguelike spin-off game Sword of the Stars: The Pit is any indication. In the tutorial for The Pit, an obvious parody of a grizzled military officer taught me how to make a sotswich, which is of course “a fine, multicultural sandwich”, made from cooked meat and Tarka Warbread. When your universe has aliens who make Warbread, I suppose it’s not that weird to make a science fiction dungeon-crawling roguelike spinoff of your huge empire-building strategy war simulation game. But the tongue-in-cheek humor and science fiction setting are only two of many reasons why The Pit feels different from its roguelike kin.

Click below to read my thoughts on the game.

In The Pit, a small window informing me of the chance of success at something appeared on the screen very, very often. It happened for almost everything I tried to do, with the notable exception of fighting. Rummaging through a pile of dirt to look for supplies? Well, that’s going to depend on my foraging skill. Sharpening my knife? Repair skill. Downloading an archived message from a computer? Computer skill. Actually trying to read said message? Decipher skill. And if I used my Digital Assistant to help me crack that computer to get the message, I’ll need to recharge it later at a charging hub. Which checks my electronics skill, of course. 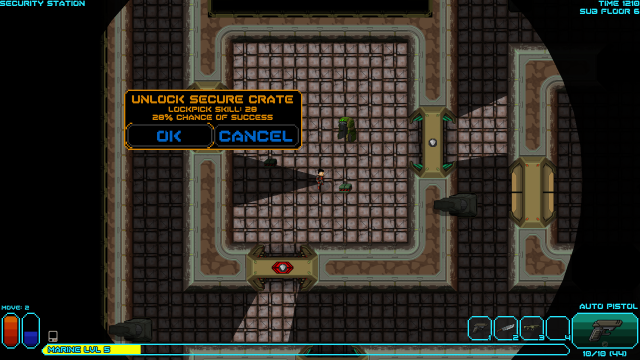 Actually, I should back up a little first. The Pit features the basics of roguelike design: a procedurally generated “dungeon” (in this case, an ancient alien research facility), a single player character, turn-based gameplay with tile-based movement from a top-down perspective, and perma-death. If you die, you must begin again with a new character and a newly-generated facility. Unlike many (but not all) roguelikes, The Pit has detailed, colorful, animated graphics, as well as a musical score and sound effects. Also unlike many rogeulikes, The Pit is not available for free, although it is inexpensive; I admit I bought it on sale for a very small sum. The general experience of playing The Pit is familiar: explore the floors of the facility, fight off alien creatures and robots, and search for food and better equipment. But that’s about where the similarities end.

Unless the player character is slowed or otherwise adversely affected, he or she (gender is locked to character class choice, sadly, with two males and one female to choose from) can move two spaces each turn. This is a radical departure from the step-by-step play seen in traditional roguelikes, and it took some getting used to, but it actually makes a lot of sense. In the science fiction setting of The Pit, most weapons are some form of firearm, and under a traditional control scheme, players and enemies would simply stand in place taking pot-shots at one another. By allowing both players and enemies to move and shoot in the same turn, the tactical possibilities get much more interesting. A character’s facing also matters; while the hero’s sight cone is quite generous, enemies that lurk directly behind him or her cannot be seen. Fortunately, changing facing is easily done and does not use up one’s turn, so one must be careful to check around corners for lurking monsters or risk getting ambushed. 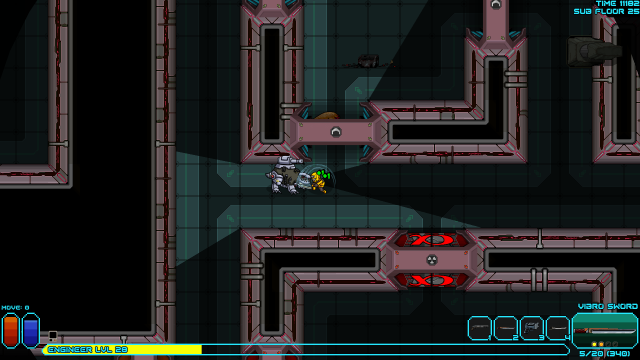 The layout of the floors of the facility is unusual as well. Consisting entirely of rectangular rooms connected (and usually ringed) with two-tile-wide corridors, it hardly varies at all as one descends further. The rooms, however, have specific purposes: storage rooms, security stations, workshops and kitchens are just some of the possibilities, and a small symbol over the doors indicates what type of room lies within. This lets players gauge the benefits and risks of entering certain areas; a badly wounded character may seek out a med-bay and skip over a security bot maintenance area. Each room typically contains a bunch of objects: ammo crates, recharge stations, cookers, freezers, various crafting stations, and more. Which is where those skill checks come in.

Everything from opening a crate to crafting an item has a percentage chance of success based on the character’s skill, and skills increase with use and by manually assigning points after leveling up. In practice, this means that characters can simply fail to open a weapon locker, jamming it permanently in the process, which is frustrating. I was often faced with the decision to try and open lockers or crates with low skill or to wait and return later, but backtracking is tediously slow and rarely worth the hassle. So, I was often foiled in my attempts to find useful supplies, and that’s not even accounting for the fact that the amount and quality of items and gear looted from these places depends upon a character’s foraging skill. I tended to gravitate towards the Engineer class since he starts with the skills needed to repair, unlock, pry open, or hack whatever sources of loot I came across, and he’s definitely a good choice at the beginning when players are still learning the ropes. 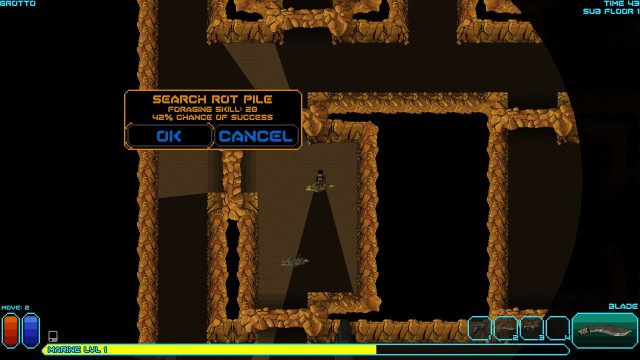 Even then, however, I ran into problems with how the game’s progression is designed. Crafting is hugely important, both for getting basic gear and ammo and for turning old, nasty scraps of food into tasty, more nutritious morsels (in a manner that I’m fairly sure violates the laws of physics). But to craft anything, you need a recipe, and to get a recipe, you have to find and decode the various messages stored on the computer terminals scattered throughout the facility. It’s not enough to simply download them (with sufficient computer skill) either; you need to decode them too (decipher skill). If a character’s decipher skill isn’t up to snuff, the message will only be partially decoded. Any decoded or partially decoded messages are stored for future characters, who may stumble upon a message again and decode more of it, which is nice. But, the precious crafting recipes are only revealed when a message is decoded in full, so collecting messages feels like a chore, as characters build up dozens of partially-decoded messages while barely getting by with the junky pistol they’ve managed to scrounge. It’s a long wait to learn what to do with all the poison glands, metal shards, strange isotopes and molecular netronium they’ve been finding everywhere.

Later I learned that this design is intentional, as a way to encourage players to work up through the difficulty levels. When playing on Normal, as I was, there are at least 150 coded messages to find. But step it down to Easy, and only the first 50 will appear. Given that these contain some of the mainstay crafting recipes, it behooves a player to start playing on Easy, collect all 50 messages, and then return to the Normal setting. So I tried it, but Easy was, well, too easy. My first Engineer character on Easy made it all the way down to the bottom floor of the facility, finding plenty of messages along the way, but I began losing interest long before that. The same-looking levels, simple repetition of rooms and objects, and the constant need to rearrange inventory as I juggled hundreds of crafting ingredients that I had no use for yet meant things became routine for the last 20 floors or so. It simply felt too long. On Normal, I was still engaged by the time my characters ended up dead on floor 11 or 12, but by the time I was down on floor 30 on Easy I’d seen far more of the facility than I wanted to. 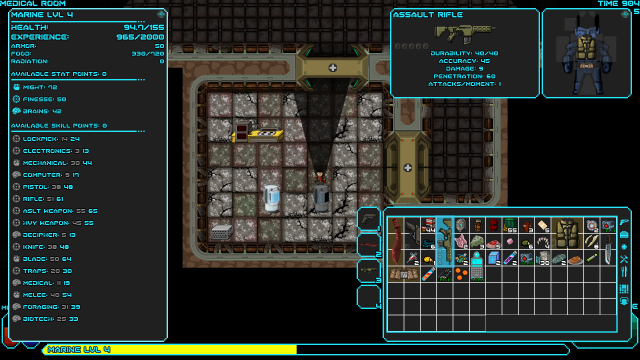 Now, I should mention that I’ve only played the base game of The Pit. There are two DLC packs (that’s downloadable content for those who didn’t know; basically they’re expansion packs that add a bunch of stuff to the game): Mind Games and the Gold Edition. These reportedly add more variety to the facility as well as a bunch of other classes to play, including alien species with mental powers or other cool mechanics. Unfortunately, I’ve also heard that each pack ramps up the difficulty considerably, so players are still encouraged to start on Easy with the base game to collect enough recipes to slowly move up to the higher settings and the DLC packs. And once one learns a lot of different crafting recipes, I imagine things would be more fun. But in the end, the focus on managing inventory and resources remains — juggling hundreds of crafting ingredients, ammo types, and more — and it just isn’t engaging enough for me. The slow grind for recipes only exacerbated the problem.

I don’t want to sound overly negative. I enjoyed my early time with the game, as I learned its systems and quirks, and I even had fun on my Easy run at first. Given the propensity for the DLC packs to raise the difficulty, I wonder if it’s simply a game that’s not designed to be completed. When characters die before floor 20, the game doesn’t feel too long, it feels just about right. In fact, as I write this I’m surprised to find I’m considering starting another run, and there are lots of dedicated fans out there who enjoy the stiff challenge of the higher difficulty settings and DLC packs. The Pit may very well be something you might enjoy, especially if scrounging for parts, building a shoddy shotgun out of metal pipes and duct tape, and then holding off a bunch of crazed aliens while you cook up a sandwich sounds like fun. Just don’t expect a traditional roguelike design. The Pit is its own game, for better or worse. 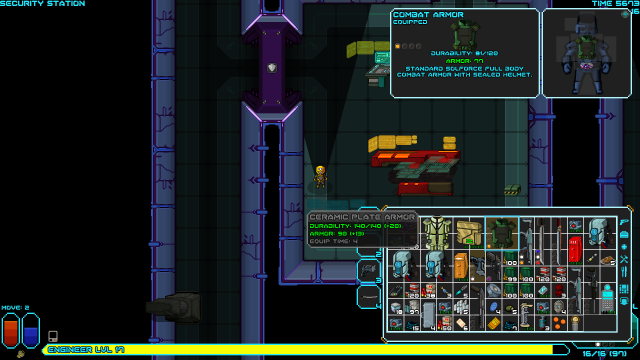 Still undecided? Well, I just discovered that there’s a free demo available, which should give you a good idea of what to expect from the full game. If you decide to take the plunge, the game is available from a variety of download services including Steam, GOG, GamersGate and Green Man Gaming. Happy crafting!