If you haven’t read it yet, you’ll probably want to read through part one before continuing.

At long last, I have finished No One Lives Forever. This took a while partly because I was busy but partly because the game is even longer than I suspected. I’m happy to report that despite the length, the quality of writing that I praised in part one never really faltered. There was one character I was unimpressed with, and a few dud jokes, but overall No One Lives Forever remained a tightly-written and thoroughly entertaining game. Most importantly, it handled the theme of sexism elegantly, without becoming overly preachy or melodramatic. Given the problems that most games have with female characters, this was a relief. Actually, it was more than a relief, because I now have a game I can point to as evidence for how to do it right. It’s not perfect — Cate’s wardrobe is a little worrying for most of the game — but in terms of the writing at least, it’s miles ahead of the norm for games at the moment.

I’m not worried though. The demand for better female characters (and indeed better characters in general) will continue to grow, and games as a whole will improve in response. But, despite holding up No One Lives Forever as an example to aspire to, new games will have to go about things differently. You see, I wasn’t entirely accurate earlier — the writing in No One Lives Forever isn’t great despite the game’s length, it’s great because of it.

At first, it seemed that No One Lives Forever is as long as it is because the developers simply had so much stuff they wanted to fit in. I don’t want too many spoilers, but the sheer amount of cool stuff you get to do in the game is staggering. There are big action set pieces, vehicle chases, interrogations, sabotage, rendezvous with informants, code phrases, secret passages, and more, and you get to do it all while traveling around the world, with no two locales looking the same. But the sheer length of the game also does something else: it gives time for some excellent character arcs. Cate Archer would not have been nearly as convincing or as fleshed out in a game that was half as long. The slower pacing of the long-form story was exactly what kept the game from becoming cliched or overbearing. 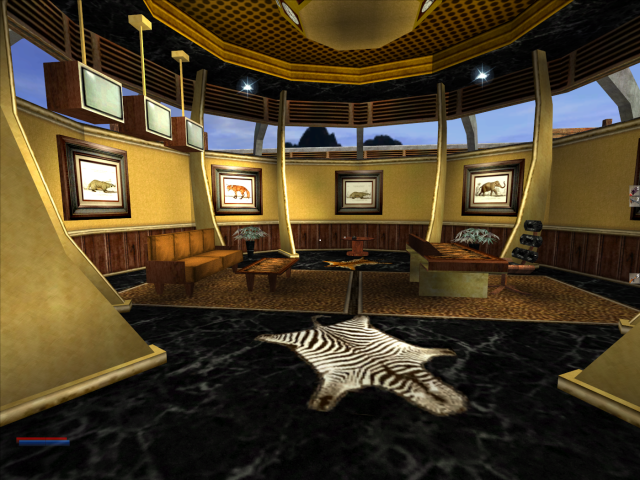 Unfortunately, a game of such length really isn’t possible anymore. With the amount of art required to make today’s high-fidelity visuals growing exponentially, the cost of creating so many levels would be prohibitive. A stylized rather than realistic art style could help, but the truth is that game development is simply more expensive these days, at least for the large publishers. Testing, legal concerns, marketing… these things all cost more than they used to. And the games market has changed too. When No One Lives Forever was released in 2000, it would have been one of only a handful of games an average gamer might purchase that year. Now, the selection of games to choose from is simply massive. Even as I played through No One Lives Forever, and had a blast, I kept hearing about new releases that sounded cool. Finishing No One Lives Forever meant delaying or skipping over those games, and even though I was enjoying myself, part of me wanted to just jump into something new right away. With so many interesting games available it’s hard to commit to a lengthy title.

Of course, this doesn’t mean that all modern games are going to be short. The recent Deus Ex: Human Revolution was surprisingly lengthy, and its writing benefited from the extra breathing room. Role-playing games are also traditionally on the longer side, and the recent Witcher series did a great job with its characters over longer story arcs. More to the point, there’s no reason that shorter games can’t have great writing too. To The Moon lasts only a few hours, but had some of the best writing I’ve seen in recent years. New games may not do exactly what No One Lives Forever did, but I’m confident that we’ll start to see some really interesting ones all the same.

But enough about the writing. I want to talk about how happy No One Lives Forever will make you. It’s simply joyous. Far from the grim and serious tone that pervades most games today, No One Lives Forever handles serious issues while maintaining a great sense of humor. It’s lighthearted, often silly, and always really, really fun. Part of it is the level design, which is unfailingly fresh and imaginative. Part of it is the enemy AI, which responds believably in nearly all situations. And a lot of it comes from the tiny details, which really do matter. I touched on this in part one, discussing how simply resetting the player’s equipment for each mission makes such a big difference. But there are countless more details too. Enemies can often be shot through flimsy objects, just like in the movies, leading to some dynamic firefights (one memorable section saw me pinned down, forced to eliminate my enemies by blind-firing through a curtain). The music is wonderfully adaptive to the situation, switching seamlessly from a quiet, jazzy score when sneaking to more swinging grooves when a firefights break out. There’s even a quick horn blare to accompany a stealthy kill. Missions are peppered with “intelligence items” to find like letters, dossiers, microfiche, and rolls of film, accompanied with humorous descriptions. Guards and thugs discuss the Beatles’ studio years or the nature of criminal psychology. All of these things, the serious and the silly, the action-packed sequences and stealthy bits, the little gameplay details, they all fit together perfectly. No One Lives Forever is overflowing with sheer character.

That’s really the key: character. It’s the main strength of my favorite games, like Outcast or System Shock. Games don’t need to be really long to have it, and they don’t need massive budgets to have it. They don’t even need a wildly original concept to have it. All that’s required is a strong sense of vision for the final product. Everything in No One Lives Forever suits a spy caper, and the developers weren’t afraid to reject genre conventions to achieve that goal. Stepping back and really thinking about what a game needs, rather than relying on what other games have done before, is absolutely critical, and that’s exactly what happened here. The result shows. No One Lives Forever may not have been revolutionary, but it is one of the most distinctive games I’ve played. For those interested in game design, I highly recommend giving it a try, and taking some notes.

And if you’re not interested in game design, you should play it anyway. Because that vision and that character really comes through. It will leave you with a big smile on your face.

As I stated in part one, No One Lives Forever is not currently being sold anywhere, so you’ll have to find a used copy if you want to play it. It’s worth it, though. Do check the end of part one for some technical notes on getting it to run. You might also be interested in the sequel, which came two years later in 2002. I’ve never played it, of course, but now I very much want to. Look for a History Lesson on that sometime in the future.

For now though, let me simply wish you some happy spying.

This entry was posted in Uncategorized and tagged History Lessons, Monolith Productions, No One Lives Forever. Bookmark the permalink.