Another World (known in the United States as Out of This World) was released in 1991, by a single man, Eric Chahi (who has recently returned to game development with From Dust). The original release was for the Amiga, a system which I have never even seen, let alone owned, but there was a DOS port a year later, which I did play.  The game made a big impression on me, as it did for many others, for reasons I will discuss.

In 2006, Eric Chahi released the Another World 15th Anniversary Edition, an updated version of the game that runs natively on Windows, has optional updated graphics, some improved checkpointing, and a bunch of extras including making-of videos. I recently got around to playing the new edition, which inspired me to write a History Lesson about it.

Another World is a cinematic platformer, a genre typified by having a more realistic rather than “gamey” style; for example, a human protagonist who can jump in a realistic manner, able to cover decent horizontal distance but very little vertical distance. Some other famous cinematic platformers include Prince of Persia and Flashback. Another World distinguishes itself from those games through its singular art style. In games like Prince of Persia, one can easily see the “building blocks” used to put levels together, made out of platforms, floor tiles and pillars. While some levels might change the graphical skin on these components, the entire game is built out of them. In Another World, each screen is hand-made and completely unique, making it feel less like a game and more, well, cinematic. The animation is also very impressive. Inspired by the cartoon-like animation in Dragon’s Lair, Eric Chahi devised an animation system using vector graphics (more on that later) that allowed him to make a variety of unique animations without requiring much storage space. He also made use of rotoscoping to create more realistic-looking animations.

Playing the game is very easy. Arrows move your character left and right, the up arrow jumps, and the space bar is a context-sensitive “action” key. Also, holding the space bar will make your character run rather than walk. While ostensibly a 2D platformer, the actual gameplay shows quite a bit of variety, with that context-sensitive action key providing quite a few different actions over the course of the game.

This variety is also used to tell, indirectly, a rather intriguing story. The player character is a physicist who finds himself warped into another world when his particle accelerator experiment goes awry. Stranded in this new land, he encounters dangerous local fauna and eventually a (mostly) hostile alien civilization, which quickly has him running for his life. This story is told without words, mostly through the gameplay itself, although there are a few short cutscenes as well. The storytelling technique is one of the most remarkable things about the game; at a time when most games resembled arcade score-chasers or board game strategy, it was not common to see a game handle narrative in such a way. I’m not sure there was another game to use the same approach so effectively until Half-Life. 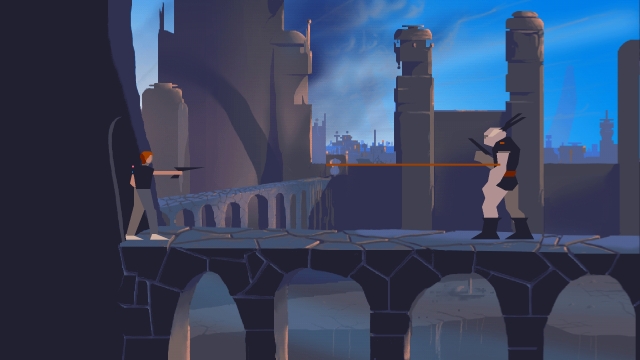 The other notable thing about Another World is the pacing. The game is not long, likely due in part to space limitations, but the player experience is lengthened due to the trial-and-error nature of the gameplay. The game is hard, and you will die a lot. In fact, in many cases you must die several times in order to figure out how to proceed. This is likely the single aspect of the game that will be hardest for modern players to accept. At the time, however, it was not an uncommon practice to lengthen games with such tactics. Adventure games, for example, were famous for keeping players stumped by a single puzzle for days or weeks. And back then, you couldn’t simply look up the solution online.

What this meant was that, at the time, the game took me a very long time to finish. The effective pace of the game was very slow, despite its short overall length. Each new screen I reached was a milestone, a reward in and of itself. And yes, sometimes I’d be stuck in a certain area for days before finally figuring out how to proceed, although I was also much younger, so it might have taken me longer than it would an adult. Even player deaths could be rewarding, as they were often accompanied with short, unique cutscenes (collect all the deaths!). This slowed pace for the game made the character’s journey much more meaningful than most modern games can manage. As I slowly figured out how to progress, I’d notice small details in the background, little things that would add just a little more to the atmosphere of the game.

Playing the 15th Anniversary Edition, the first thing I noticed is how good the game still looks. The vector graphics that Eric Chahi used for the in-game characters can be easily scaled up to any resolution, meaning they still look good on today’s high-resolution monitors. Plus, new, high-res backgrounds are included if the player wishes. The second thing I noticed is that the game runs faster than it did when I played the DOS version all those years ago. That was probably due to limitations of my hardware at the time, but the increased speed definitely made the game feel less methodical and tactical than it did back then. The third thing I noticed is that I can finish the entire game in about 20 minutes.

Every solution to every area is engraved in my memory, such that I was able to breeze my way through without any trouble at all. Combined with the overall higher running speed, this served to take away a lot of the weight of the game’s narrative that had so struck me the first time I played the game. The first time, I felt like I had followed the protagonist on a long journey through this alien world, lost for days in caves, running and hiding from alien patrols in a strange city, and eventually making a last, desperate run for freedom against massive odds. Blowing through the game in 20 minutes, I encountered none of this gravitas. The whole game felt like a single action sequence from a film.

I’m not sure it’s possible, today, to have the same experience I did when I first encountered the game, even for one who’s never played it before. These days it’s too easy to “cheat”, to look up the solution rather than sit and struggle through it on one’s own. Even if one spends a few minutes trying to figure it out before giving up and checking a walkthrough, this won’t slow the pace enough. It will still seem a short curiosity rather than an epic tale. And yes, perhaps some of my experience was due to youth. A modern player who resists looking up solutions would still likely find them easier to figure out than I did back then. 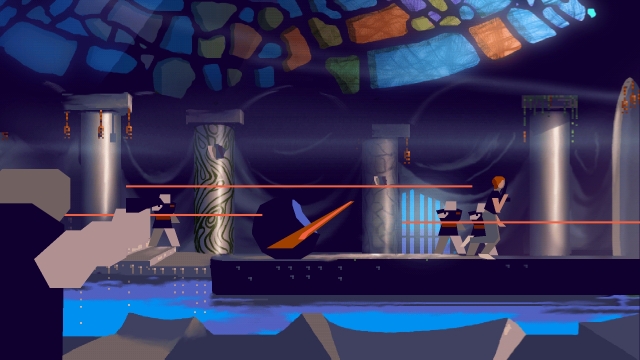 Nevertheless, I encourage you to try it. It’s still a fascinating piece of work, with a distinct and very effective visual style and a whole lot of imagination. It’s also an interesting look at a time in games when genres were not so solidified, and something could come along that was almost entirely new in its approach. The fact that it has a single author, something which the scale of modern games makes almost impossible today, means that it holds fast to its particular style and vision, and does not compromise. Even if it will seem little more than a curiosity, it’s worth playing.

It’s not like it will take you very long.

Another World 15th Anniversary Edition is available from GOG.com or direct from Eric Chahi’s site, although there is a rumor that the version from his site contains DRM whereas the GOG release does not. I should also note that the improved checkpointing in the 15th Anniversary Edition can sometimes be slightly wonky, occasionally forgetting that you already did something, so backtracking a short distance to be sure can be in order.

5 Responses to History Lessons: Another World